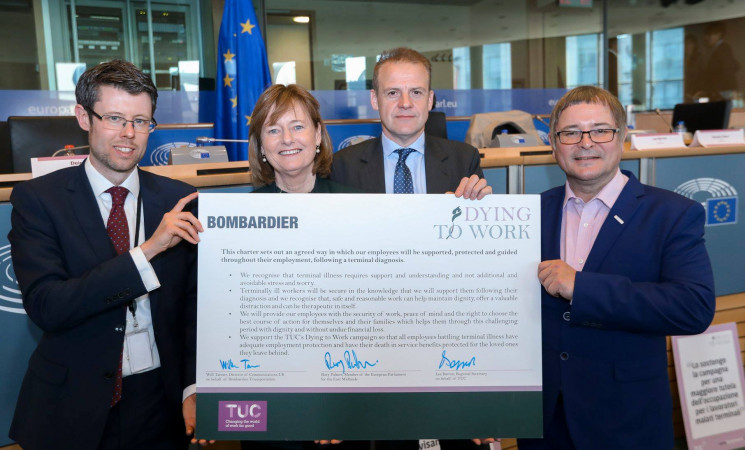 Last week in Brussels, I officially launched  the European Dying to Work Campaign at the European Parliament, Brussels.

Terminally ill workers should be granted a protected employment status under EU law, similar to pregnant workers, in order to prevent unfair dismissals or treatment. As it stands, there are no specific protections for terminally ill employees under EU law. The Dying to Work Campaign, which originated in the UK, notes with concern the cases of the unfair dismissal or treatment of terminally ill employees. We are calling for the introduction of EU legislation to the safeguard of the rights of employees by identifying terminal illness as a protected characteristic. That could be achieved by providing such employees with a "protected" employment status under EU law, similar to that which is contained within the Pregnant Workers Directive.

The European Parliament’s cross-party Dying to Work Focus Group, of which I am a Member, is raising awareness of this type of discrimination and calling on employers to sign up to the Dying to Work voluntary statute and pledge to support their employees in the unfortunate case of terminally illness. I have also tabled amendments calling for employment protection for the terminally ill to a new report on Pathways for the reintegration of workers recovering from injury and illness into quality employment which will be voted on at the European Parliament.

I am also seeking EU funds and support for a pilot project to gather data on the employment status of people with metastatic cancer, with a focus on breast cancer patients, to assist in designing better policies and service provision: Tens of thousands of Europeans are currently living with metastatic cancer, which has spread to other parts of the body and remains incurable.

A metastatic cancer diagnosis is not necessarily an immediate death sentence: in metastatic breast cancer, for example, half of patients will live with the disease for longer than two to four years. During this time, patients must deal with complex legal situations regarding their health, social care and employment rights.

For many, remaining in the workplace is a personal or economic imperative. People work for money, but they also work because they find their jobs meaningful. Employment can provide stimulation, dignity, and a sense of continuing to be a useful member of society, which is an element central to a patient’s overall quality of life.

As life expectancy rates continue to rise in some tumour types, together, patients, patient advocates, healthcare professionals, politicians and policy makers have the capacity and legitimacy to make policy suggestions - this proposed pilot project is an example of that.

For more information on the Dying to Work Campaign, which originated in the UK, visit: https://www.dyingtowork.co.uk/