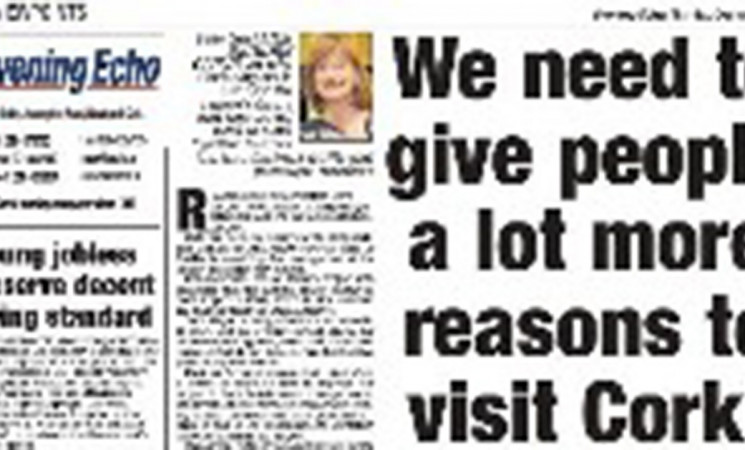 First and foremost, we must deal in fact when it comes to assessing how to improve our airport in Cork. In fairness to management at Cork airport, they continue to engage with existing Airline customers and other potential airlines to add to the 50 destinations currently served to and from the Airport.

The airport industry across Europe is facing into a difficult period. 44% of Europe's airports are loss making and 75% of European airports with less than 1 million passengers per year are in the red.  The nature of the aviation industry is changing as airlines pursue higher yields rather than capacity growth. Airlines now, for the most part, have the upper hand when negotiating with airports. Airline traffic is also becoming increasingly focused on our main European airports. Cork Airport is operating against this backdrop and trying to adjust to a new set of rules in the world aviation industry.

One of the main aims for Cork airport at this point in time is to attract new routes. While the number of new airline routes in 2010 was 1141 in Europe, this figure had fallen to just 251 new airline routes across Europe last year. That is a tenfold drop in the number of new routes that are coming on stream across Europe. This is in part because airlines are now more focused on high volume routes. It is against this backdrop that Cork airport is operating and striving to attract new routes and new business.

The elephant in the room is Cork airports debt which is a hangover from its ambitious, which now seems unnecessary, new terminal built in 2006. The airport built this new terminal to cater for, what was at the time, passenger numbers approaching 3 million. The original terminal, built in 1961 had a capacity of 1.8 million passengers annually and couldn't cope with rising numbers. That debt is now DAA debt. Cork cannot sustain this debt on its own which is why, for now at least, Cork airport must remain part of the DAA. To argue that the airports problems would be solved by leaving the DAA is to ignore the fact that Cork airport cannot sustain this debt on its own.

There is little we can do about that debt now but deal with it head on. Whatever mistakes that were made in the past, by past governments, in relation to Cork airport are a moot point. What matters now for Cork is the future and that is where management must look to.

Let's not forget what we currently have. Cork airport serves 50 destinations across Europe and the UK. Management have stabilised the fall in passenger numbers. Their challenge, along with the development council, is to increase the number of routes and people who want to come to Cork. This is easier said than done when one looks at the overall aviation market across Europe.

The airport serves a number of important hubs such as London Heathrow, Amsterdam, Paris and Manchester. From here, passengers can reach almost any destination in the world. We have to make greater use of this connectivity to attract incoming passengers to the Cork region.

Unlike other aviation stakeholders, airports generally cannot reduce or change capacity during difficult times. As businesses that incur significant sunk costs in terms of infrastructure investment, airports by necessity must focus on the longer term. Their optimal strategy therefore is to make long-term commitments to the regions and countries they serve and to work towards outcomes that strengthen the economic potential of these areas. The fortunes of Cork airport and the wider economy of Cork are inherently linked.

Future prospects for Cork airport lie in the airports ability to sell itself as a gateway to the South of Ireland. Cork and the surrounding counties of Munster have a catchment area of 1.6 million people. There are a number of aspects to this including tourism. Cork Airport can act as a gateway to Ireland’s Wild Atlantic Way –a tourism initiative which has proved enormously popular across the world. As this tourist route grows and is heavily promoted, we too must promote Kinsale and Cork airport as the starting point on that journey.

As the world continues to become increasingly globalized, people are realizing that it is not just airlines or airports that are competing, but in fact entire regions. They are vying not only for inbound tourists, but also for business travelers, conference attendees,  inward investment, increased trade and in some cases, human talent, to fuel their economic engines. To be successful regions need not only to be well known – they need to target niches within specific fields which reflect their own individual strengths.

This means the development of in depth strategies which both reflect and shape a region’s distinguishing characteristics, the identification of target audiences and prospective customers, and the execution of marketing plans which link the two. In short, we need to give people more reasons to come to Cork! Cork has a massive amount to offer but we can only exploit our strengths if we work together as a community to drive tourism, business traffic, growth, and eventually passenger numbers at the airport. They are all linked.

We have a depth of cultural heritage in Cork. We have excellent third level institutions, a booming pharma industry and an emerging tech sector that most cities would be envious of.

As a region, we must work with all of these resources to give passengers a reason to travel through Cork airport. Only then, will the health of the airport reflect a strong and committed local community working together for Cork. Ni Neart le Cheile! Together, we are stronger!